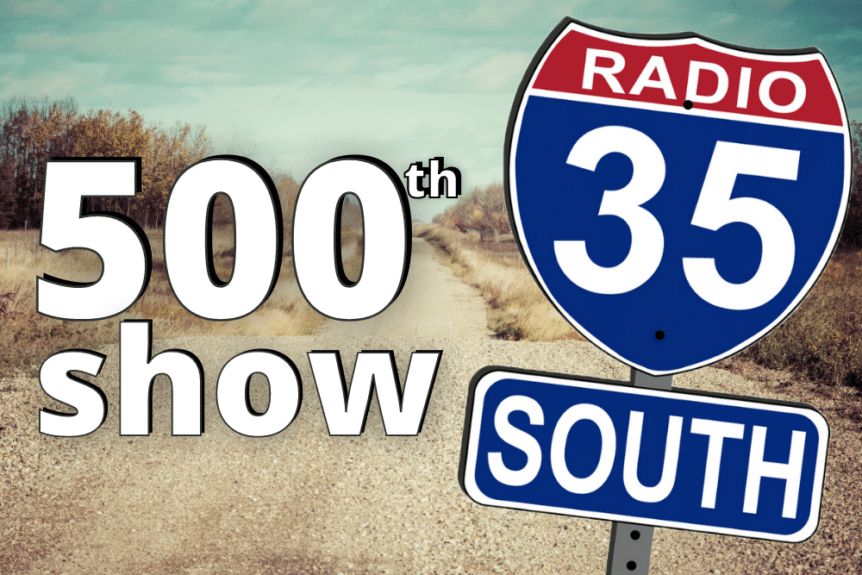 In 2012, Colby Ericson produced the first-ever episode of the popular radio show, 35 South Radio. Colby and 35 South have both gone on to win numerous awards, including the 2022 Texas Regional Radio Music Awards’ Specialty Show of the Year this March. Exactly one week ago, Colby produced 35 South’s 500th episode!

We sat down with Colby to talk about 35 South and how 500 episodes feels.

What have you improved from your first show to your 500th?

The overall concept of the show. At first it was just about the music. Then it’s evolved into concerts, MC-ing shows, interviews, giveaways, and promoting Local Red Dirt artists too. Some of the local artists have even had top 40 singles on the Texas Regional Radio Report.

Opportunities you’ve stumbled across because of having the show?

I’ve made several friends on the Record Promotions side and they’ve allowed me to see shows in places outside of the listening area…Stillwater’s Calf Fry and Tumbleweed, the Oklahoma City Zoo, Billy Bob’s in Fort Worth to name a few. Of course, being able to attend the Texas Regional Radio Awards and meeting all the artists. Hosting and MC-ing Shows.

Tell us something funny that has happened on the show.

It wasn’t on the show, but I was booed at Wave [in Wichita, KS] introducing Whiskey Myers. The band had just opened for the Rolling Stones at Soldier Field in Chicago, and I told the crowd I was jealous because I was a Bears a fan, and the booing commenced.

What advice do you have for someone who wants to start a show or podcast about music?

Take the deep dive, know your subject matter. I’m not an authority on Red Dirt but I’m a reliable resource.

It was growing in popularity but no one in radio was really playing it. There was a show on another station, but that guy was fired, and no one filled the void. There was an opportunity to grab the audience and build our listener base.

What made you want to start in radio in the first place?

I grew up listening to WLS outside of Chicago and thought: “Those guys get paid to do that?”

What is the best concert you have gotten to attend since starting?

There are too many that I’ve just enjoyed, but probably the most impactful was Cross Canadian Ragweed Opening for Gary Allan at the Kansas Coliseum. That was my first real exposure to Red Dirt, and Cody Canada from the band and I have been friends for a while now.

What is the hardest part of having a radio show?

I don’t know if anything is really hard about having a radio show. I know there are a lot of moving parts, and it takes quite a bit of time to make sure it’s a quality show.

What has been your favorite part of having a radio show?

I don’t have to work. Just like the old adage states: find something you love and you’ll never have to do a day of work in your life.

How has producing the show changed since you started in September of 2012?

Besides it starting out as only a one-hour show? I do more show prep and talk to more Red Dirt Record promoters weekly.

How much more do you think it’ll change before your 1000th episode in December 2031?

Hopefully I’ll have groomed someone to take over the show by then and I’ll watch it grow from either the beach or golf course.

Listen to 35 South on any of our My Country stations – no matter where you’re located! And follow 35 South on Facebook!